I've definitely hit some nerves saying that. Feel free to lash out publicly in the comments, or privately on twitter.
But the truth remains and is this: That Tupac as well as almost any other hip-hop legend [like Biggie and co.] were bad influences on both the young and old.
I love hip-hop; I am a rapper, but I am not (and by God's grace will never be) a fan of hip-hop that promotes evil.
Tupac's music almost always promotes evil in one way or another, and except you're crazy insane, you will agree that we don't need more evil influences in our society. #ExcuseMyHonesty

What is evil?
Hate. Murder. Immorality. Lack of self control, etc.

We already have enough artists doing this in 2012. We don't need a money-hungry company to fake-resurrect a dead rapper and feed more filth into the heads of my generation. Yes, I said filth... or do you prefer garbage?

What's the big deal? It's just one rapper.
Now if you think for one second that the company behind this (Digital Domain Media Group Inc.) will be satisfied with fake-resurrecting Tupac, sorry madam/fella, you're deluding yourself.
It's being said that they've bought the rights to use this same technology for Elvis, Kurt Cobain, Biggie, Johnny Cash, Hendrix, and young Bob Dylan.

Here's the bad news: It won't stop there.
I can see this technology being used for crazy evil.
Like what?
Think Hitler, delivering his hate-infused speeches in 2015 or even earlier.
It is very possible.

And just as every other thing authored by the devil is, these holograms are fake.
They are neither the real person or even video-shots of the real person; what these 2D-holograms are, are actors who look the same physically (body wise) + some very good 3D animation.

What to do?
My [peaceful] rant does nothing but inform you of what you probably already know.
What we can do is pray that this comes to nothing.
But in this all, God's good and perfect Will will be done.

This is creepy to say the least, and I love technology... like a lot.

Finally here's a picture of Tupac at Coachella; The 2D animation (that everyone including me is referring to as a hologram) performed with Snoop Dogg and Dr. Dre. 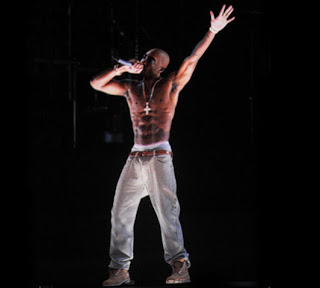 Agree or Disagrrree? Blast away in the comments.