Rev. Billy Graham has made his support for and endorsement of Mitt Romney official.
The 93 year old evangelist who will be turning 94 after the elections in November had this to say:

“It was an honor to meet and host Governor Romney in my home today, especially since I knew his late father former Michigan Governor George Romney, whom I considered a friend. I have followed Mitt Romney’s career in business, the Olympic Games, as governor of Massachusetts and, of course, as a candidate for president of the United States.

“What impresses me even more than Governor Romney’s successful career are his values and strong moral convictions. I appreciate his faithful commitment to his impressive family, particularly his wife Ann of 43 years and his five married sons.

“It was a privilege to pray with Governor Romney—for his family and our country. I will turn 94 the day after the upcoming election, and I believe America is at a crossroads. I hope millions of Americans will join me in praying for our nation and to vote for candidates who will support the biblical definition of marriage, protect the sanctity of life and defend our religious freedoms.”

I love Billy Graham. I love Obama. I don't know much about Mitt Romney (except that he's a mormon) and pretty much supports many things that I support as a Christian (who isn't mormon :D )

Billy Graham is a wise and very much respected elder and man of God, but that doesn't mean that he is right endorsing Obama. I'm not saying Billy Graham is wrong either.

All I'll say is that before you vote, pray (and fast as led by God) about which presidential candidate to vote for.

I'll like to hear your thoughts about this endorsement. It is a pretty big deal. 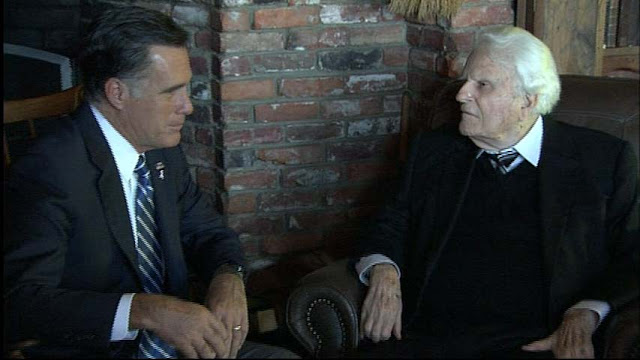